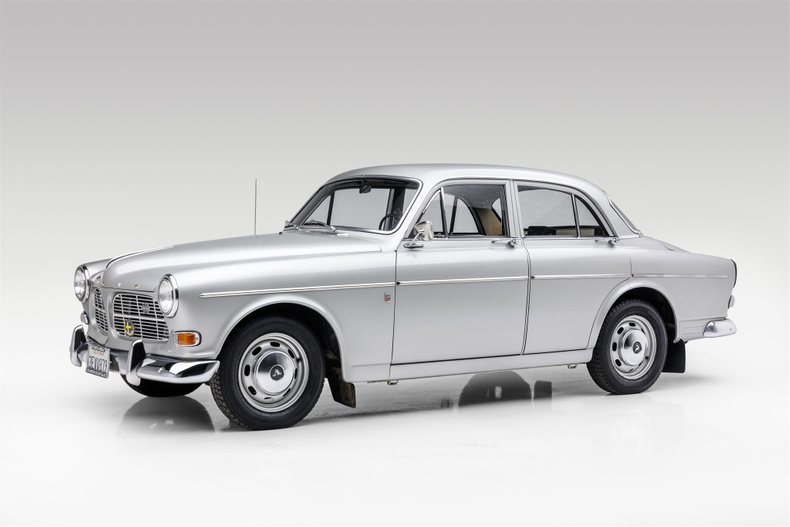 Two (2) owners, California Car, finished in Silver Metallic (180) with a black leatherette interior. The paintwork is in very nice overall condition with good gaps and panel fit. The interior is original and is trimmed in black vinyl with cloth inserts in the seats. The lower dashboard is painted body color as well as the upper door trim. The instrumentation includes a horizontal 120-mph speedometer, gauges for coolant temperature, fuel level, and a five-digit odometer. The factory steel wheels are 15″ with chrome hubcaps.

The earliest known history of this vehicle begins on June 23, 1978, when the first owner, Mr. Calderwood, took his vehicle in for service at Earl Ike Volvo in Costa Mesa, California. Subsequent services under Mr. Calderwood's ownership were largely performed at Laguna Beach Imports until the end of his ownership in 1993. In 1994, this Volvo was sold to its second and current owner. On November 13, 1995, Fabricante Auto Body in Lake Forest, California performed a windows out repaint in Mercedes Silver metallic (180). Recently this Volvo has had the brakes completely rebuilt, new Bilsteins shocks were installed, the sway bar was replaced, and a full service was performed. The transmission is a manual 4 speed, shifts through the gears up and down with no issues and the overdrive works as well.

History of the 1959-1970 Volvo 122
Enthusiasts who immediately imagine boxy 1970s designs when they hear the name “Volvo” might be surprised to learn upon the first look that the 122 is in fact a Volvo design. The car, otherwise known as the Amazon, has a rather pleasing and rounded look to it not unlike some American cars of the early 1950s. There is even something vaguely Italianate about the car's front, looking not unlike an Alfa Romeo sedan of the 1950s.

Production on the Amazon commenced in Sweden in 1956 in tandem with the elderly PV544, but the car didn't make it to American shores until late 1959. The 122 was a considerable advance over the 544 with far greater interior room and better outward visibility. The B18 and later B20 engines, while not powerhouse, were bulletproof and able to easily travel hundreds of thousands of miles without a rebuild. A three-speed and a four-speed manual transmission with optional overdrive were available along with an automatic transmission, and the car's base price was $2,795.