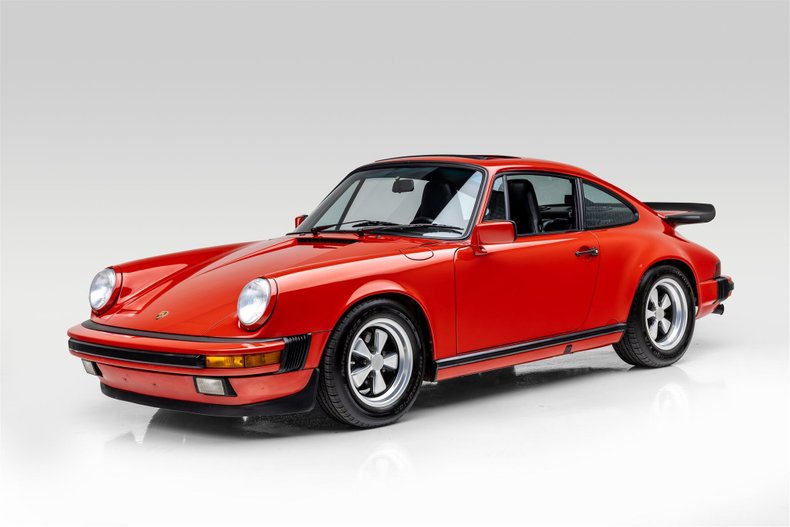 Originally delivered by Meister Porsche Audi in Garden Grove, California on June 6, 1987. Clean Carfax finished in its factory color combination Guards Red (L80K) with a black leatherette interior. Factory equipment includes California Emissions, Blaupunkt AM/FM Charleston SQR 26 radio, Automatic Speed Control, and an Electric Sunroof. The paintwork is in exceptional condition with perfect gaps and panel fit. The interior is all original with a Porsche 4-spoke steering wheel, VDO instrumentation, and an aftermarket AM/FM Kenwood Stereo. The undercarriage is very dry with no signs of any rust.

Mechanically powered by a 3.2L flat-six engine (type 930/25) producing 217 horsepower paired with a manual 5-speed transmission (950/01) and four-wheel disc brakes. Excellent turn-key driver that has been well maintained over the years. The air conditioning is ice cold with a new compressor and dryer that were replaced in 2020. Complete with a clean Carfax, Owner's Manual, Warranty book manual for the Blaupunkt Charleston SQR 26 radio, tool kit, and a spare tire. An excellent opportunity to acquire a highly desirable 3.2 Carrera equipped with the coveted G50 transmission.

History
The 3.2-liter 1984 Porsche 911 Carrera debuted hot on the heels of a very successful run of 911SC models, built from 1978 to 1983. The Carrera was priced at $32,000 and shared most of its visual cues with its immediate predecessor, but benefitted from added power and performance, as well as other evolutionary updates. The cars came as they had when the SC bowed out, in a Coupe, Cabriolet, and the Targa body styles. The chief upgrade in the Carrera was the larger 3.2-liter flat-six engine, which looked much like that of the 3.0 it replaced but was built chiefly of all-new parts. One crucial change was an improved hydraulic timing chain tensioner, which had been an issue on previous models. Also new was Bosch Motronic fuel injection, which replaced the K-Jetronic system. From 1984 to 1986 the engine produced 207 horsepower with a five-speed manual 915 transmission. This was enough to propel the Carrera from 0 to 60 mph in about 5.5 seconds. Changes in the fuel map and chip programming from October 1986 (for the 1987 year-model) further improved the power to 217 hp at 5,900 rpm for North American delivered cars.