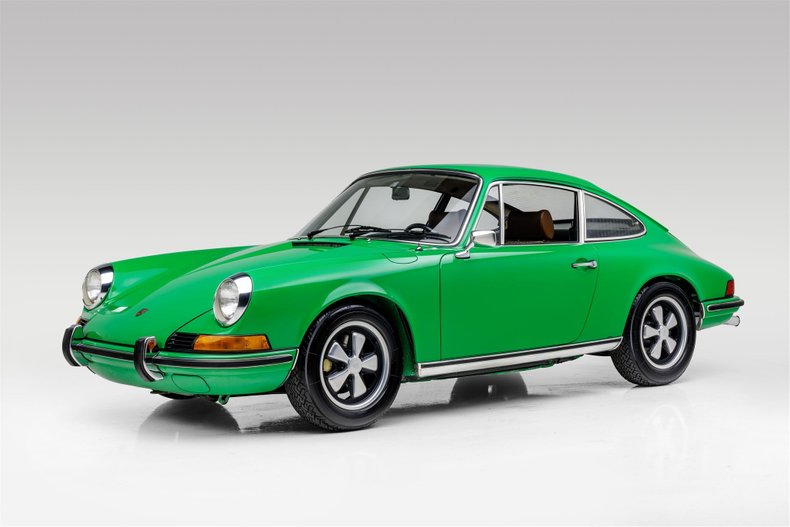 According to the maintenance record booklet, this 911T was first sold to Mr. Slessman on July 3, 1973, by Will Dennis Porsche|Audi in Toledo, Ohio. Documented dealer services are recorded in the maintenance record booklet for the first 20,000 miles, with the last service occurring on August 20, 1979. The vehicle transferred ownership in 1979 to the second owner, Mr. Wuestefeld, who became the longtime owner for nearly four decades. The paperwork on hand indicates that Mr. Wuestefeld performed many of the earlier services himself and kept detailed, handwritten notes of the work completed with mileage recorded. When he was unable to perform anything that was outside the scope of his expertise, he had M. Haines Ltd. in Stonington, Connecticut work on the 911. By the early 1990s, Mr. Wuestefeld began driving the vehicle very sparingly and accrued less than 500 miles per year. On October 4, 2000, at 73,747 miles, M. Haines Ltd. performed a full rebuild of the braking system. Due to Mr. Wuestefeld's age, he had the vehicle stored from 2003 to 2013.

Once the vehicle arrived at European Collectibles it was given a full inspection and determined that this was an excellent candidate for a full mechanical refresh. The engine and transmission were removed from the vehicle along with all suspension components. The entire undercarriage was ice blasted, the suspension was restored, and the braking system was completely rebuilt.

The engine was completely disassembled, the cylinder head, head studs, pistons and cylinders, and connecting rods were all removed. The engine case was sent out to be checked and line-bored; it is standard/standard. Clean oil squirters, media tumble case, R&R boil plugs, hot tank, and barrel shims. Engine case savers and an oil bypass modification kit were installed along with a new GT1 series oil pump to increase oil pressure. The connecting rods and crankshaft were sent out to be balanced and the rods were re-bushed. After the crankshaft was balanced it was polished and the plugs were removed and cleaned. A complete valve job was done and new intake and exhaust valves were installed in the cylinder heads. The oil cooler and injectors were cleaned with an ultrasonic machine and new GT1 series chain tensioners were installed. All the hardware was media blasted, tumbled, and polished. Gold zinc plating was done on the necessary hardware. The fan was restored, Zinc plated, ceramic coated, and balanced. The connecting rods and crank were checked again, installed, and torqued. New main bearings were measured and checked, new head studs, internal gears, and the crankshaft were installed and the backlash was checked. The two-engine halves were then mated together with new seals and gaskets. The through-bolts were installed and the 8 mm nuts were torqued. The pistons and barrels were cleaned and checked, new cylinder rings were installed on barrels, and the connecting rods were attached to the case. The rebuilt cylinder heads were installed to the barrels, the chain housing and chain sprockets were installed and the cam timing was set. The rockers, change box covers, spark plugs, heater boxes, exhaust, hoses, flywheel, pressure plate, and clutch disk were all installed. The complete rebuild of the engine is documented.

Mechanically powered by its matching 2.4L flat-six engine (type 911/91) that is capable of outputting 140hp at 5700 rpm, with a compression ratio of 8.0:1, paired to its 5-speed manual transmission (type 915/12). Complete with two keys, Porsche Fahrzeugbeschreibung, Blaupunkt manual, 1973 owner's manual, maintenance record booklet, and 40 years of service history. European Collectibles is proud to offer this stunningly original one-year-only CIS 911T, finished in a desirable color combination and truly in amazing condition.