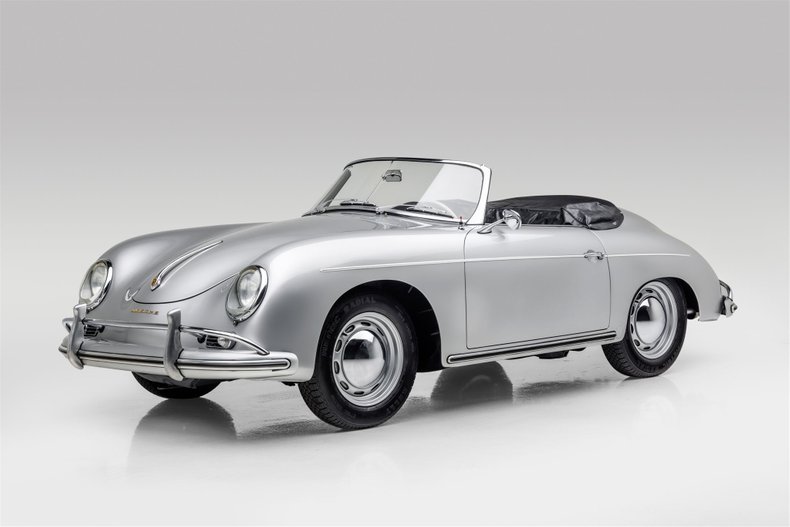 Denoted by a taller windshield and roll-up windows, this Roadster was subject to an older restoration using its original, unrestored, exterior trim. Today, this Convertible D presents beautifully with a stunning coat of Silver Metallic paintwork and perfect gaps and panel fit. The upholstery is in excellent condition and features correct door panels, CoCo mats, VDO instrumentation, and a two-spoke VDM steering wheel. The silver-painted rims are 4.5” x 15” with baby moon chrome hubcaps fitted to 165 R15 Radial tires. The undercarriage is incredibly straight and rust-free in exceptional condition.

Navy Lieutenant - Warren Jones ordered VIN 86669 new from Mitsuwa Motors LTD on October 8, 1959, for $3,071.95 USD. The vehicle was then imported to California where it was registered and driven in San Mateo, California for the following 54 years. Under Mr. Jones' ownership, the 356 was driven very sparingly and accrued most of its mileage from 1970 to 2003. Documentation shows a linear progression of mileage backed by service records dating back to 1971. In 2013 Mr. Jones decided to sell his 356. The Convertible D was traded once more to a collector on the East Coast before finally reaching Mrs. Paprocki the most recent past owner. Under Mrs. Paprocki's ownership, she entrusted Automotive Restorations Inc (ARI) in Stratford, Connecticut to keep the vehicle in excellent mechanical shape. On March 31, 2017, ARI performed a complete overhaul of the braking system, installed new sway bar bushings, and installed new transmission mounts which totaled to $5,719.75. In 2017, over $20,000 was spent completing a full engine and transmission rebuild and replacing any worn components as necessary. ARI continued regular services and addressed any concerns Mrs. Paprocki had until late 2021. When the Convertible D arrived at European Collectibles, we performed a complete engine-out service, serviced the braking system, and detailed the undercarriage.

History
In July 1958, Porsche sent a letter to all its foreign representatives, stating that the four-year-old, bare-bones Speedster, which had been designed specifically for the Western markets of the United States, had not been well-received elsewhere. A new model was forthcoming for 1959, and it would be manufactured by Karosseriewerke Drauz, of Heilbronn.

This would be the Convertible D, which was introduced as an interim step before the arrival of the 356 B Roadster in 1960. The new ConvD would offer buyers Speedster-like styling, but it added such amenities as a wind-up door glass in place of side curtains, a taller windshield, a better taller top, and a more luxurious interior with coupe seats standard. New and larger teardrop-shaped taillights would replace the earlier “bee-hive” style lamps, and U.S. cars were fitted with front and rear bumper guards and over-riders. Porsche sales literature described the new Convertible D as “a dynamic car of beautiful proportions. Extra light and low in design for competition and pleasure driving.”

Only 1,331 Convertible Ds were built between August 1958 and September 1959, with nearly all being fitted with either the 60-horsepower Normal 1600cc engine or a special ordered 75-horsepower Super 1600cc engine. With a curb weight of less than 2,000 pounds, the Convertible D could reach 60 mph in a little more than 14 seconds in Normal form, and it was capable of topping 100 mph. With relatively quick steering (2.3 turns lock to lock), handling was very good, and the large four-wheel drum brakes were quite effective.