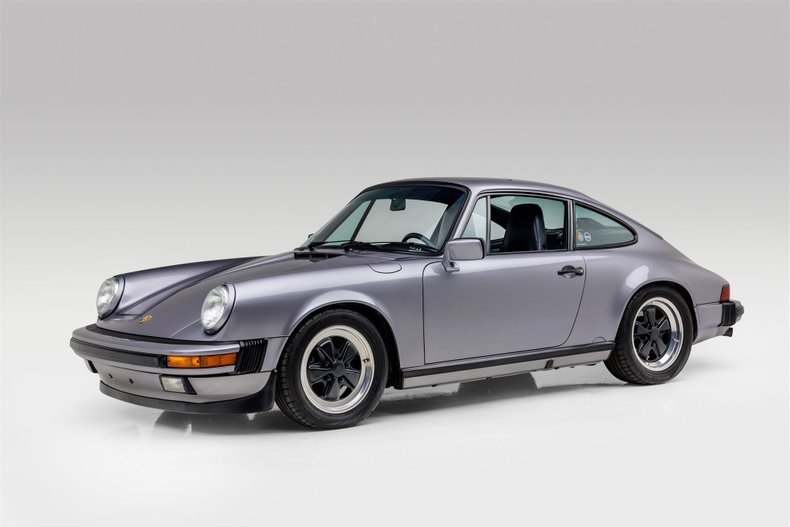 In accordance with the warranty booklet, this vehicle was delivered new on September 12, 1987, to the first owner, Mr. Miller, by Hinsdale Motor Cars in Illinois. Documented dealer services are recorded in the warranty booklet from the first entry at 165 miles to the last entry at 39,666 miles, which occurred on July 17, 2007. The Carfax report indicates that this vehicle spent most of its life in California and has a linear progression of mileage listed from 165 miles to 67,793 miles with no odometer discrepancies. Records on file begin in 2002 when it was serviced at Schneider Autohaus with 35,008 miles. On August 19, 2015, Ted's Foreign Car Service in Scotts Valley, California performed a 60,000 miles maintenance, which included the replacement of all fluids, spark plugs, filters, alternator drive belt, the left, and right cam oil feed lines, installment of a new engine sound deadening pad and a valve adjustment; this totaled $2,688.61. The records on file reflect an extensive service history in Santa Clara County before the vehicle eventually made its way down to Orange County where it has remained ever since. Regular services have been largely performed by Auto Strasse in Costa Mesa, California since 2018. Most recently, this Carrera Coupe has been fully serviced, the AC compressor and dryer have been replaced, and the system has been recharged.

Beautiful condition throughout without any notable dents, chips, or scratches to the original paintwork. Paint meter readings confirm the originality of the paintwork. Further expressing the vehicle's originality, are the VIN stickers which are present on both doors and deck lids along with the original options sticker underneath the front hood. The upholstery has been incredibly well preserved and features air conditioning, a power sunroof, and a Nakamichi TD-45z AM/FM/Cassette stereo. The factory Fuchs alloy wheels 6” x 16” and 7” x 16” are fitted to Dunlop Direzza DZ102, 205 55 R 16 front, 255 50 R 16 rear tires. The 3.2-liter flat-six produces 217 horsepower and 195 lb-ft of torque while the power is delivered to the rear wheels through a G50 manual five-speed 915 transmission with four-wheel disc brakes. Complete with smog compliant 24-pin S Performance Chip, jack, spare tire, tire compressor kit, date coded KPZ collapsible spare tire, trophies, owner's manual, warranty booklet, and 20 years of service history. An excellent opportunity to acquire a low mileage, original paint, G50 3.2 Carrera, finished in a unique color combination.

History
The 3.2-liter 1984 Porsche 911 Carrera debuted hot on the heels of a very successful run of 911SC models, built from 1978 to 1983. The Carrera was priced at $32,000 and shared most of its visual cues with its immediate predecessor, but benefitted from added power and performance, as well as other evolutionary updates. The cars came as they had when the SC bowed out, in a Coupe, Cabriolet, and the Targa body styles. The chief upgrade in the Carrera was the larger 3.2-liter flat-six engine, which looked much like that of the 3.0 it replaced but was built chiefly of all-new parts. One crucial change was an improved hydraulic timing chain tensioner, which had been an issue on previous models. Also new was Bosch Motronic fuel injection, which replaced the K-Jetronic system. The engine produced 207 horsepower and came mated to a five-speed manual 915 transmission. This was enough to propel the Carrera from 0 to 60 mph in about 5.5 seconds. You could say the 3.2 Carrera was a grand finale of sorts, but it was certainly not the end of the road for the 911.