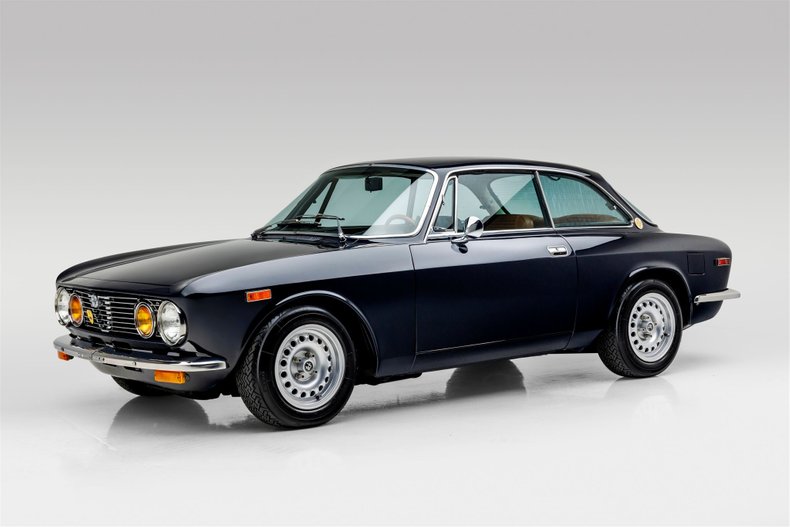 Single ownership for the past 7 years, USA delivered GT Veloce, originally finished in Azzuro Le mans over Cinghiale Maremma upholstery. The exterior paintwork has been recently repainted in dark blue under previous ownership and shows beautifully with excellent gaps and panel fit. Exterior equipment includes chrome bumpers, chrome exhaust tip, and quad headlamps. The interior was recently reupholstered by the past owner and features a new interior including the front and rear seats, door panels as well as a black dashboard with wood trim. Equipment includes pop-out rear vent windows and a wood shift knob. The wood-rimmed steering wheel and Jaeger instrumentation include a 140-mph speedometer, a tachometer with a 5,800-rpm redline, with oil pressure, fuel level, and coolant temperature. The steel 14″ wheels have been powder-coated silver with Pirelli Cinturato CN36 185 70 R14 tires. The undercarriage is all original and presents very well with a detailed suspension.

According to the Centro Documentazione Alfa Romeo, chassis AR 3023521, was delivered new on, May 15, 1974, to the US Market in Englewood Cliffs, New Jersey. In accordance with the original service booklet, on April 15, 1975, the Alfa was purchased new by William Henderson from Carlo Noce Imported cars in Vestal, New York. The documentation on hand reveals that at some point Colonel Ira Kiyomura owned this Alfa from 1981 to 1989 when he had the vehicle stored at Fort Riley in Kansas. In 1990, Colonel Kiyomura sold the Alfa to a friend, Mr. Exline, who eventually parted with the Alfa almost a decade later. A California registration card documents ownership by a well-known Alfa collector Mr. Howard Hu of San Francisco, California before selling the Alfa to its current owner in 2015. After the current owner acquired the Alfa, he began documenting his journey in a logbook where he states that he drove the vehicle on February 22, 2015, from San Francisco to Point Reyes. In his notes, he describes that he stopped for lunch along the way with a friend and that the car performed perfectly logging over 160 miles during that trip. The same level of detail is notated in his logbook during every trip he took until 2018. On May 21, 2021, Gran Turismo of Los Angeles was commissioned to perform the following work an oil and filter change, replaced the battery, replace the fuel pressure sensor, adjust the headlight position, replace the speedometer cable, replace the instrument lights with LED bulbs, replace the valve cover gasket, install race-style lap belts, replace the front and rear brake pads at a total cost of $3,484.97.

Mechanically powered by a 2.0-liter twin-cam inline-four cylinder engine that features SPICA fuel injection and sends power to the rear wheels through a five-speed manual transmission. Complete with original service booklet, two keys, additional Alfa literature, and four decades of records. A rare opportunity to acquire a stunning example of a 2000 GT Veloce.

History
The Alfa Romeo 2000 GT Veloce (also known as 2000 GTV) was introduced in 1971 together with the 2000 Berlina sedan and 2000 Spider. The 2000 range was the replacement for the 1750 range. Once again, the engine was rationalized throughout the range. The engine displacement was increased to 1962 cc with a change of the bore and stroke to 84 mm × 88.5 mm. Oil and radiator capacities remained unchanged. The engine produced 130 hp at 5500 rpm. The 2000 GTV is most easily distinguished by its different grille. From 1974 on, this became standard on the GT 1300 Junior and GT 1600 Junior as well. The interior trim was also changed, with the most notable differences being the introduction of a separate instrument cluster, instead of the gauges installed in the dash panel in earlier cars.