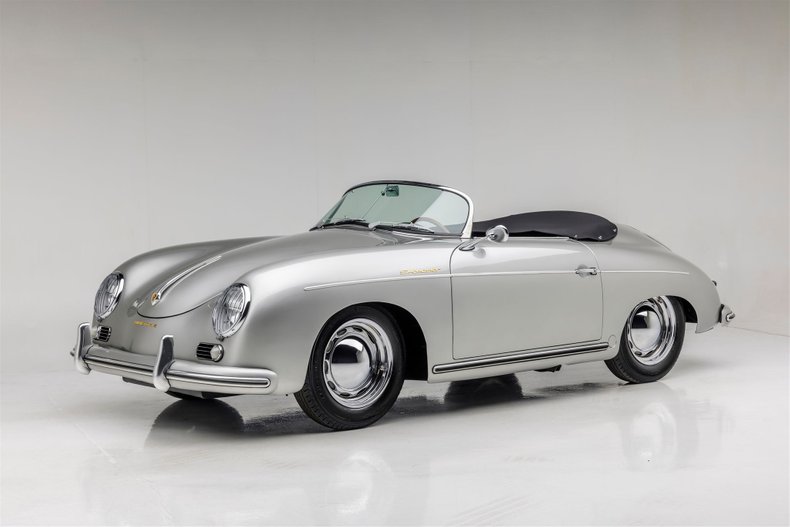 According to the Kardex, this 356 was distributed by Hoffman Motors in New York and was originally finished in White over Red leather upholstery. Factory equipment included sealed beam headlights and a tachometer in miles.

This Pre-A Speedster has gone through a full restoration. The restoration was conducted nearly 10 years ago and included a high-quality repaint in Silver Metallic, with a German interior installed, and an engine rebuild. When the vehicle arrived at European Collectibles, the Speedster was in excellent mechanical condition with great compression. European Collectibles performed a complete transmission rebuild, full engine service, and the braking system was rebuilt as well.

Mechanically powered by a period-correct 1500cc flat-four engine (type 546/2) paired to a 4-speed manual transmission (type 519) and four-wheel drum braking system. Complete with a spare tire, side curtains, boot cover, and a Kardex. This Speedster is in excellent cosmetic and mechanical condition. It is well sorted and is a pleasure to drive.

History
The Speedster was simple, and its light weight made it more fun to drive than the cabriolet. The windshield was cut down and the top curved, and an aluminum side spear made the car appear even lower. Tiny side screens replaced roll-up windows, and the top was minimal. The dashboard was made lighter with revised gauges, a padded lip, and no glove box. Seats were lower and non-reclining. The Speedster literally took off in the U.S., finding over 4,144 enthusiastic buyers between 1954 and 1958. The venerable Speedster was a fixture at American tracks in the 1950s, driven by anybody who was anybody, from importer John Von Neumann to future F1 world champion Dan Gurney and meteoric movie star James Dean. Skip Hudson was black-flagged when lying 3rd at the 1955 Torrey Pines races and had to explain to the judges that he didn't have to slow down for the corners because he could four-wheel drift around them.