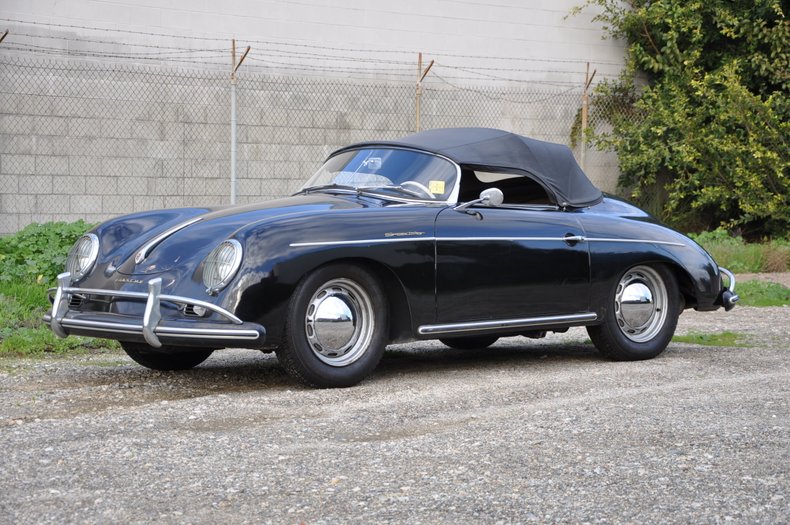 It's hard to believe, but Porsche design and the Germans in general were able to reboot and go from thinking about Tiger tanks to sports cars in the span of just three years. In 1948, the first Porsche 356 emerged from a converted sawmill in Gmund, Austria (the Allied occupation forces were the new residents of Porsche's Stuttgart, Germany offices).

European Collectibles purchased this Speedster back in 2010 from a long time owner in Santa Cruz, Califoirnia who owned this 356 for over 40 years! A perfect Speedster that is ready to drive! Everything has been rebuilt mechanically including the engine, transmission, suspension and braking system. This Speedster has been driven and enjoyed with out having to worry about a rock chips or scratch. Drive it anywhere without having to worry about were you park, there is something to be said about that!!! Long-term ownership with history and paper work. Complete with the Porsche Certificate of Authenticity, owner's manual, spare tire and jack. It was original finished in Meissen Blue with a Black Leatherette interior.

This is a rare opportunity to acquire the most desirable driving Speedster a T2 which you can drive & enjoy or do a complete cosmetic restoration to full show concour condition in a fantastic original color combination! Making it even more desirable is that fact that it is unrestored and complete with all matching components. Most Porsche Speedsters are found restored; it is becoming nearly impossible to find such an original Speedster in this barn find condition that is dialed in and ready to enjoy!