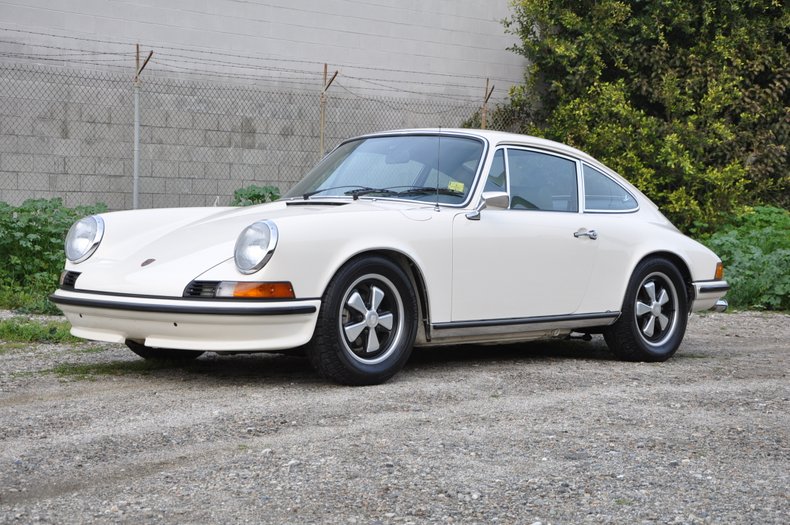 Few cars made as permanent a mark in the automobile history in both engineering and design as the Porsche 911 and the 1973 2.4-liter production year is widely considered Porches best vintage 911. Today, the early model years (1965 to 1973) are considered highly collectible, offering the purest forms of iconic sports car. Early 911's embody a combination that is rare among collector cars today. They have unparalleled drivability and usability, especially when compared with other cars of this the same vintage.

All early 911's have appreciated tremendously in recent years, with good solid cars seeing especially significant increases in value. The late cars (1972 and 1973), fitted with a 2.4 Liter engines, are very desirable, and are generally regarded to be the ultimate development of the original long hood 911. The 911 S was the top-of-the-line of the 911 range (other than the 73 Carrera RS) featuring the most sporty equipment and the most powerful engine.

This fine example, chassis number 0738, which can arguably be considered to be one of the best of the best, was delivered new from Zuffenhausen factory in 1973. It's one of only 1430 911S built in 1973 model year. Only about 10% of these cars were special ordered with factory sunroof as it was an expensive option at $400 above and beyond the base price.

It is believed that the first owner a resident of Southern California, kept the car until the late 1990s, when renowned Porsche authority Bill Perrone of Huntington Beach, California, acquire the car. The car is said to have been in very original condition at the time, still with its original interior in place and most of its original paint intact. Mr. Perrone kept the car until 2004. A Southern California enthusiast with a taste for great Porsches acquired the 911 from Perrone and did a concour restoration with help from many experts including Porsche specialist TLG in North Hollywood, and the interior was installed by Autobahn Interior of San Diego. The entire car was disassembled and restored to 100 point Concour condition, multiple award winner & is one of the finest 1973 911 S that can be found!