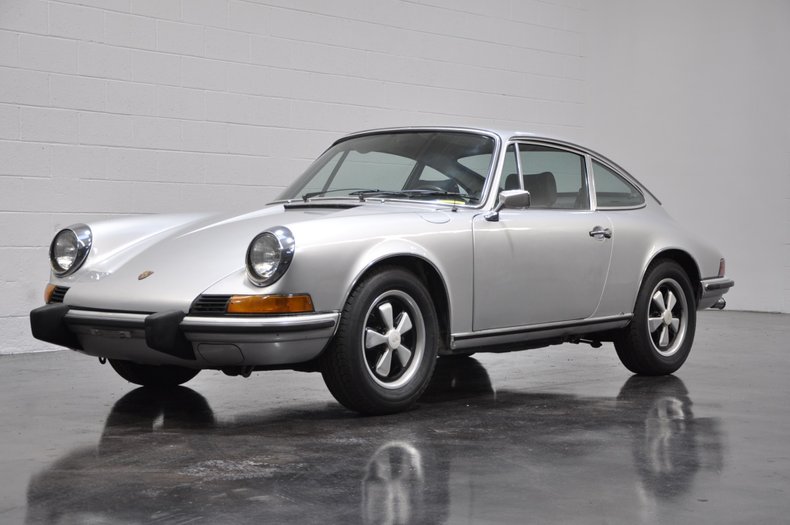 Certificate of Authenticity, Matching Numbers, Excellent Driver, CIS Injection. Produced July 1973 one the very last produced off the line and commonly referred to as a 1973.5, as only the 911T cars produced from Jan '73 through July '73 had the CIS (Continuous Injection System) K-Jetronic Fuel-Injection, considered the preferable version, producing 140 Horse Power, but still enjoyed the lighter weight and classic look of the "Long Hood & Thin bumpers". Interestingly, only the 1973.5 CIS system has the injector in the cylinder head, as all subsequent models ('74-on) moved the injector to the intake manifold.

1973.5 911T's were somewhat unique, and fuel injected versions were only produced for the last six months of the model year before the new 1974 model 911s came out with the big bumpers. It was the swan song of the early series 911.

These are the most desirable of the early 911T's, because of the relatively torquey 2.4L flat-six engine, and the 915 manual traditional 5-speed gearbox, both having been introduced in '72, and now improved with the addition of CIS injection, replacing the T model's Solex carburetors. The 911E and 911S models cars still used the older "MFI" Mechanical Fuel Injection, which was a little racier, but not very efficient or well behaved.

This 911T came equipped with an S Package as seen on window sticker and COA. It received the 1,000-mile service just 9-25-1973 at 1,378 miles. The car's provenance includes the original maintenance booklet containing this information, as well as stamps for the 10,000-mile service. Four (4)-owner car with the second and third owner having retained it for most of its life.

The second owner used the 911T regularly for few years, retaining records for the work; the engine & transmission were rebuilt by Tom Armon of Mobile Works West in 2009. Tom was the former owner of T&D Porsche shop of Campbell California a true Porsche enthusiast. Tom removed the engine and performed a detailed service of major components. Chain tensioners were upgraded, the fuel tank was drained and cleaned, the clutch and brakes were serviced, and key mechanical components changed out only as needed. Attention to originality was key as this car had been well preserved during the storage period. At some point during the 3rd ownership, the car was repainted in a silver metallic. This paint job remains on the car today, exhibiting a driver quality paint, showing some signs of wear, but remaining very presentable and serviceable for driving duties. Regarding the interior, the carpets, seats & headliner are original and in nice condition.

The original body and components make this an excellent driving 911 overall. The gearbox is smooth and effortless and exhibits no play or difficulty engaging. Once the engine is warmed up, throttle response is very good and the revs come on smoothly in all gears. Cornering is very nice and the overall steering is tight and responsive. This 911T is truly a very nice driving car that can be enjoyed as is. Included: tool kit, jack, spare wheel, Porsche Certificate of Authenticity, mechanical records, two brand new batteries and four new Vredestein Sprint 185/70/15 tires.

This is a very nice original matching numbers Porsche 911 that can be enjoyed as is or restored to concourse condition.