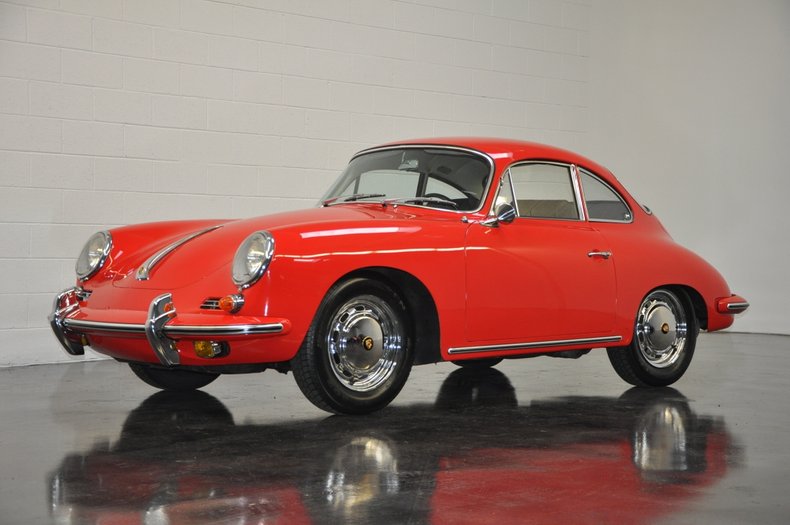 Purchased new from Otto Glockler in Frankfurt, Germany by Miss Ingrid Wernlo Miss Wernio, who drove the 356 in Europe until the summer of 1964. She then shipped the 356 back home to Manhattan Beach, California. She enjoyed the 356 for another 13 years and then sold it to the second owner from Newport Beach, California in 1977. Who enjoyed the 356 for many years. Then decided to restore the 356 with his son. The 356 was stripped to steel and the body was completely metal finished to perfection. It was then painted Signal Red with a Black interior. They worked with Gary Emory at Parts Obsolete back in the day when they were on Randolph Street in Costa Mesa, California. Over 100 pages of receipts of original parts that were used.

Excellent mechanical condition with an SC engine, producing 95 horsepower, smooth shifting 741 manual 4-speed transmission and four-wheel disc brakes. If you are after an excellent example of the 356C production, look no further, this is truly an amazing 356!

The last revision of the 356 was the 356C introduced for the 1964 model year. It featured disc brakes all round, as well as an option for the most powerful pushrod engine Porsche, had ever produced, the 95 horsepower (71 kW) "SC". 356 production peaked at 14,151 cars in 1964, the year that its successor, the new 911, was introduced to the US market (it was introduced slightly earlier in Europe). The company continued to sell the 356C in North America through 1965 as demand for the model remained quite strong in the early days of the heavier and more "civilized" 911. The last ten 356's (cabriolets) were assembled for the Dutch police force in March 1966 as 1965 models.