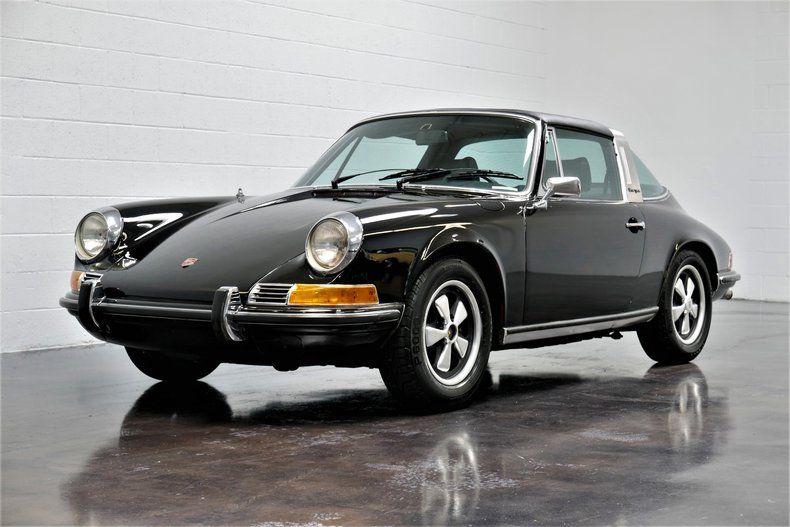 Original color Sepia Brown (color code 415). Extremely original example with only one re-spray (color change) in Black. The paint is in exceptional condition with excellent panel fit & very good gaps. All original floor pans and front suspension (rust free). The interior is very nice & original with excellent fitting door pockets. Original vinyl front & rear seats and new carpeting. The dash has a small crack in between the speaker grill and the windshield. The Fuch Alloy rims have been restored and fitted with new Pirelli P6000 tires.

Mechanically the 911E starts right up and drives like a dream. Very powerful 2.4-liter engine with Mechanical Fuel Injection (MFI), which produces 165-horsepower, very smooth shifting 915 manual 5-speed transmission & four-wheel disc brakes. The 2.4-liter 911E is very difficult to find & is one of the best early 911's to drive. This 911E represents excellent value for its condition. If you're looking for a great driving early 911 Targa, look no further.

In 1972 a tremendous effort was made to improve the handling of the 911. Due to the 911's unusual engine placement (rear-mounted, with most of the vehicle's weight concentrated over the rear axle) early 911's were prone to oversteer when driven at the limit, and could easily spin in the hands of an inexperienced driver. In an attempt to remedy this, Porsche relocated the oil tank from its position behind the right rear wheel to in front of it. This had the effect of moving the weight of almost 8.5 l (9 US quarts) of oil from outside the wheelbase to inside, improving weight distribution and thus, handling. To facilitate filling of the oil tank, Porsche installed an oil filler door (much like the fuel filler door on the left front fender) on the right rear quarter panel. Unfortunately, this unique design was scrapped after only one year, some say because inattentive gas station attendants were putting gas in the oil tank. The oil tank was subsequently moved back to its original position for the model year 1973 and remained there until it was moved back within the wheelbase for the 964 models.