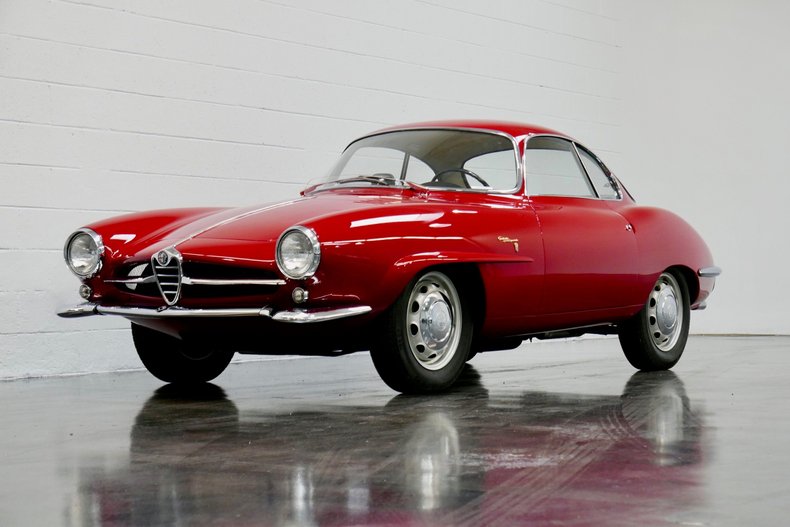 With the introduction of the Giulietta in 1954, Alfa Romeo established the "small car, big performance" formula which would characterize the Milanese marque's finest offerings from then on. Alfa's classic twin-cam four was downsized to 1,290cc for the Giulietta, gaining an alloy cylinder block in the process. The original Bertone-styled Sprint Coupé was soon joined by Berlina (saloon) and Spider (open) versions, and then in 1957 came the model intended to represent the ultimate Giulietta - the Sprint Speciale – the first of the new 101-Series cars.

Built on a slightly shorter wheelbase than the standard Sprint, and again the work of Bertone, the mouth-wateringly curvaceous Sprint Speciale came with 100bhp on tap, a five-speed gearbox and a top speed of 125mph. Compact, aerodynamically efficient and very powerful for its size, the Sprint Speciale proved highly successful in 1,300cc class racing the world over. A mere 1,366 examples had been produced by the time the model was superseded in 1963 by the Giulia version. Today these rare, coach built models are highly prized by Alfa Romeo connoisseurs and collectors around the world.

The beautiful example of Bertone's styling-masterpiece offered here is believed to have been used by the Alfa Romeo factory when new, possibly as a US market demonstrator or Motor Show car. The Giulietta Sprint Speciale was completed at the Alfa Romeo works on January 20th, 1961, and was destined for the US-market, where Max Hoffman's, Hoffman Motor Car Company of New York later took delivery. Hoffman was at the time the North American Distributor for Alfa Romeo, along with many other prestigious European-manufactured vehicles. The new Giulietta Sprint Speciale was finished in red exterior paint and carried Bertone body number 87.381. This car was sequentially the 3rd of 742 examples assembled in the production year of 1961, out of the total run of 1,366 Giulietta Sprint Speciale's produced from 1959 through 1962.

The new Giulietta Sprint Speciale is believed to have been air-freighted to the US, rather than standard ocean transport. From the time of delivery at Hoffman's and over the next eight months, formal ownership remained with the Alfa Romeo Factory. Although there are no confirming records or reports, it is believed by Alfa Romeo historians, that this car could have been displayed at North American Motor shows while still owned by Alfa Romeo.

Hoffman finally purchased the Sprint Speciale from Alfa Romeo on November 3rd, 1961. From here, the Alfa Romeo's ownership history remains unclear, but the car is reported to have been with a long-term US-based owner in 1990, having 40,000 original miles and in remarkably original condition. Not long thereafter, the car was sold and exported to Japan where it was road registered in 1991. The Alfa Romeo remained in Japan, with a single owner, until the late 1990s.

In early 2013, the Sprint Speciale was sold to a Japanese dealer and then exported back into the United States. Over the next two years, the car was stripped and repainted in the original and correct shade of Alfa Red, while careful attention was given to preserve the cars many original finishes. The Giulietta Sprint Speciale presents beautifully throughout and would be a great car for vintage rallies or local Concours shows. It has been serviced recently including a complete rebuild of the transmission, new clutch, throw-out bearing, new master cylinder, rebuilt pedal box by DV Mechanics in Montebello, California. The Webers have been rebuilt along with the fuel filter/regulator and fuel line by a specialist on the East Coast all back to OEM specification, but the diaphragms and fuel line have been upgraded to aircraft spec rubber so they will never deteriorate due to our ethanol-based fuel. A new exhaust has been installed from the headers back. Excellent mechanical condition and is ready to enjoy or show. These Bertone-bodied Giulietta's are among the best-looking Italian cars of the era and offers excellent handling and light steering. The all-alloy DOHC sporting engines loves to be revved, and with 5 gears, you can really keep them on their cams.