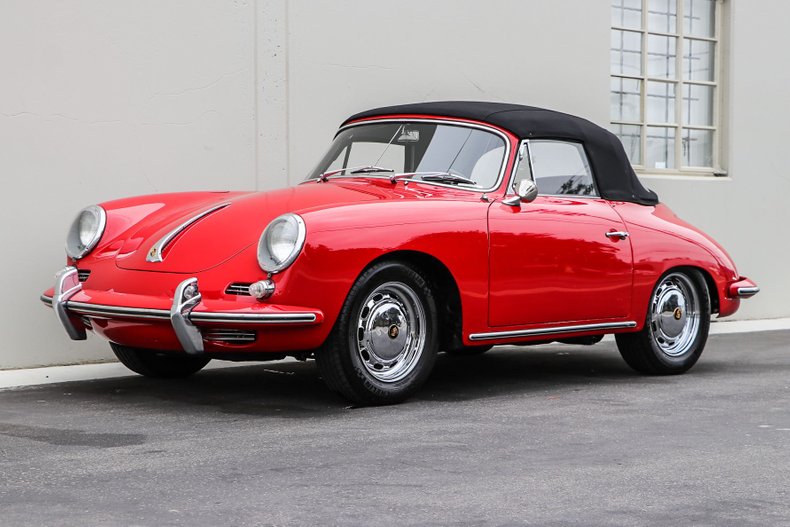 Two owners, California car. According to the Kardex, the 356 was delivered on February 10, 1964, to its 1st owner, David Whittet who lived in Walnut Creek, California. Mr. Whittet had the vehicle regularly serviced and maintained at Diablo Valley Automotive in Concord, California. The second owner took possession of the 356 sometime in the late 1980s. In 1991, the first documented service under the second owner was completed at Schneider Auto Haus in Santa Barbara, California.

Currently finished in Signal Red with a Black interior with leather seats, new German square weave carpets and a new Black canvas soft-top, pad, headliner and boot cover. Very nice paintwork with a few imperfections but all and all it is in great condition. Straight and rust-free body with solid floor pans. The matching 1600cc engine, producing 75 horsepower, runs very strong paired to a manual 741 4-speed transmission and four-wheel disc brakes. Offered with Kardex, service invoices spanning from 1981-2010, tool kit, jack, and owners manual. An amazing running and driving 356C Cabriolet offered at a great value.

The 356C represents the final and most developed version of the model that made Porsche's reputation on roads and racetracks throughout the 1950s. It was a far cry from the handful of basic sports cars made in a small village in postwar Austria. Porsche had grown exponentially and gained an enviable reputation all over the world for building high quality, fun, and quick sports cars. It was almost all thanks to the 356, and the 356C was a worthy send-off.