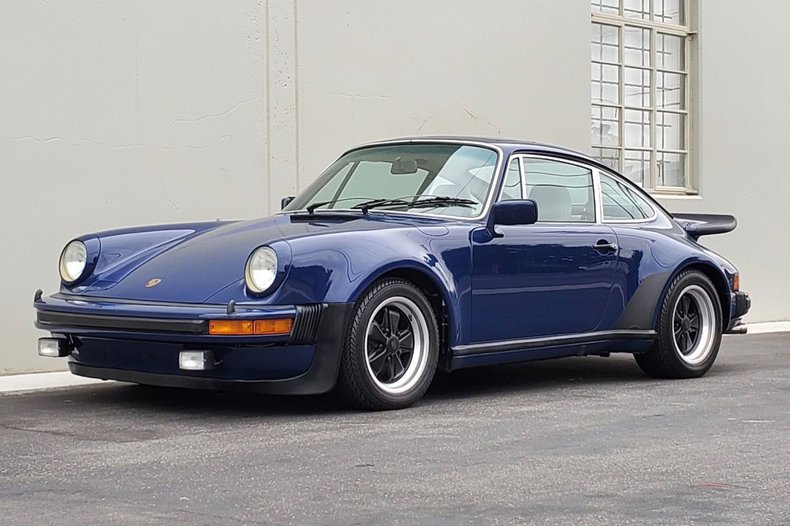 European Collectibles is pleased to offer this 1976 Porsche 911 Turbo Carrera that is one of just 520 U.S. Turbos built in the first year they were produced for the US market. This car was a specially ordered through Annis Morrill Porsche Audi of Natick, MA and is believed the only one in this configuration. The original order specified, Paint to Sample Albert Blue, Leather to Sample Light Grey Leather, Limited Slip Differential, Exterior Mirror Passenger Side, Electric Sunroof and Pirelli Tires. Once the car arrived at the dealer, it was fitted with Carello Headlamps, Blaupunkt 23 CH CB Radio, Rear Fog Lamp and European Tail Light Lenses. The total MSRP with dealer added options was a staggering $28,570.

The first owner kept the car from new until 2006 when it was sold to another resident of MA with just 49,708 on the odometer. The third owner (California) purchased it in 2012 with 55,209 miles and the most recent owner (Michigan) purchased it a year later (2013) via California Porsche Restorations in Fallbrook, CA. Prior to his purchase, CPR performed and oversaw the following work: partial repaint of any rock-chipped areas, a new leather interior by Autos International and a rebuild of the engine's top end. In 2017, with 57,300 miles on the odometer, $8,000 more dollars were spent with Classic Imports Inc. on service and safety-related items. In the summer of 2019, the AC system was completely rebuilt and an oil change was performed.

After arriving at European Collectibles we drove the car several times and felt that it wasn't performing well and it leaked oil, so we sent it out for a diagnosis by a local specialist. It was determined that a significant amount of work was needed, so we allowed him to push forward. He began with a valve adjustment and replaced both lower valve covers (the uppers had been done when the top-end was rebuilt). Prior to installing new spark plugs, compression and leak down tests were performed. All cylinders measured 125 PSI for compression and the leak down fluctuated between 4 and 5%. New plug wires were installed and the wastegate received a new diaphragm. The oil was changed along with front and rear hood shocks. The brake system was inspected and everything was found to be in top condition - brake pads, rotors, lines, and brake fluid. All-in just shy of $3,500 was spent making the car run and drive as it should.

This is an exciting first-year U.S. Turbo in an extremely attractive and rare color combination with low original mileage. It is being offered with a Porsche Production Specifications certificate, correct spare wheel and compressor, jack, tools, owner's manual, and some service invoices.