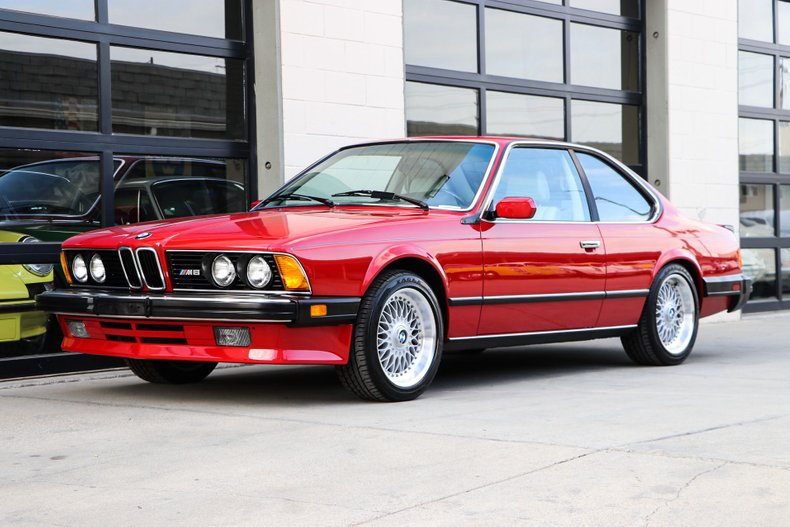 Originally delivered by Center BMW in Van Nuys, California on Feb 20, 1987, to Fred Rifkin. California car with only four (4) owners. Original paint and pin stripping finished in Cinnabar (Red) with a Lotus White leather interior. Beautiful example with only 77,549 miles. The clutch was replaced 4,000 miles ago, all new struts and the suspension has been gone through and all worn components were replaced, new catalytic converters were installed and passes California smog with no issues, air conditioner compressor was replaced in 2018, and an original front spoiler was sourced from the BMW factory and installed. Recent service was just done including spark plug wires, ignition rotor, distributor cap, and spark plugs. Complete with tools, books, and extensive service records.

The BMW 6-Series coupe had the rather unenviable task of following up on the Wilhelm Hofmeister-designed 2000CS, 2800CS and 3.0CS coupes, whose production ran from 1967-75 and was capped by the outrageous competition lightweight CSL “Batmobile.”

The new model range had to combine world-class performance with stunning elegance, and Paul Bracq was tasked with re-thinking BMW's top-line car. The result was a squarer, more aggressive “shark-nosed” coupe, which would be built in various forms to 1989, culminating in the blisteringly fast M 635 CSi, which used the 24-valve M88 motor from the M1 and could hit 158 mph in European tune.

Bracq followed the design cues from the previous BMW coupe, with a divided kidney grille, large greenhouse, and broad hood and trunk, but the 6-Series had thin B-pillars, and the bodies were assembled by BMW at Dingolfing instead of Karmann's Osnabruck works.

Handling remained by all-round coil springs and McPherson strut front suspension, semi-trailing rear links, and recirculating ball steering. New to the 6-Series was speed-sensitive power steering, four-wheel disc brakes, and a complete warning light system to alert the driver about the engine and electrical systems. The 2+2 seating saw a driver-angled dash flow down to a console that also separated the rear bucket seats.

The first 6-Series cars were launched in Europe as the 630CS, with the 3.0-liter six-cylinder engine, and a four-speed Getrag gearbox or three-speed ZF automatic transmission. The first U.S. cars of 1977 were badged 630CSi, with Bosch L-Jetronic injection after grumbles about the modest performance.

Engine sizes gradually increased to 3.2-liters then 3.5-liters, but the 6-Series really hit a bullseye with the M635CSi, which appeared at Frankfurt in 1983. Apart from the 282-bhp M1 engine, it had a limited-slip differential and the “track link” suspension from the big 7-Series sedans, which was designed to reduce oversteer. ABS brakes arrived at the same time, along with a five-speed manual gearbox or a four-speed ZF automatic.

Badged simply as the BMW M6, the 635CSi finally reach the U.S. in 1987, lavishly equipped with twin air-conditioners (and a beverage chiller in the rear), hand-stitched Nappa leather interior with eight-way power front seats, and an eight-speaker sound system. Distinctive M6 details included M badges front and rear, a larger front air dam and rear spoiler, matching color side mirrors and BBS wheels. The cars were fitted with new ellipsoid headlights, which directed a more precise beam onto the road.

The M6 could manage 0-60 mph in 6.1 seconds, a quarter-mile in 14.7 seconds and cruised easily at 140 mph. It retailed for $55,950 but if you wanted the same look with more modest performance, the identical appearing L6 model was $6,000 less, though only available with an automatic transmission.