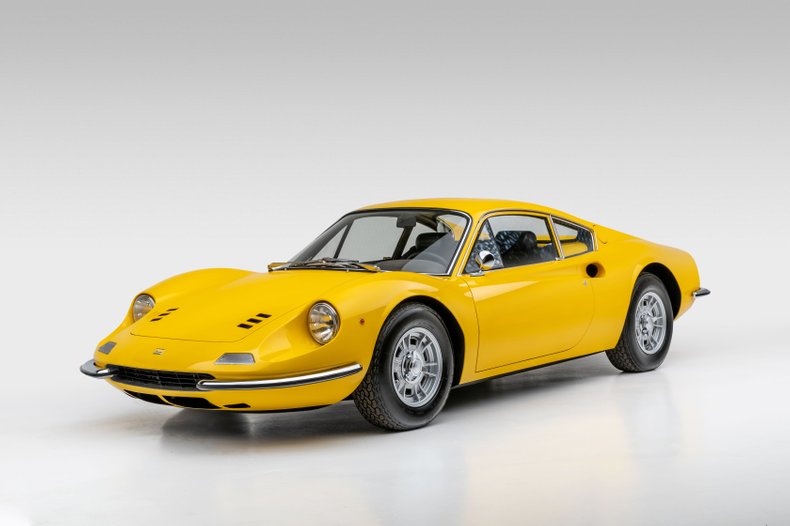 Chassis number 00908 is the 149th 'L' series built, not much is known about the early history of the 246. In 1981 the Dino came into California. Michael Delprincipe purchased the L in 1994 and enjoying it for a few years in Redondo Beach, California. European Collectibles purchased this 246 from Delprincipe in 1996 and sold it to the current owner who has had the Dino for the past 24 years.

The 246 has gone through a complete concours restoration by Francorchamps of America, Inc (FAI) in Costa Mesa, California, over a 7 years restoration from 1998 to 2005. The 246 was then shown over the next 5 years and was rarely driven. From 2010 to 2020 the owner has enjoyed the Dino and has covered 8,000 miles. During the restoration, the body was completely stripped to bare metal and every aspect was addressed. The engine, gearbox, suspension, and braking systems were all completely rebuilt and new wiring harness was installed. The original color was Rosso Chiaro 'Ferrari' Red but the owner wanted a stunning color combination and choose to paint the car in a period-correct original color Giallo Fly Yellow with a Navy Blue interior, it is simply stunning!

Accompanied by a full set of 246 GT books, manual with brown leather pouch, parts catalog, original 246 GT brochure, Veglia-Borletti clock tag with string, Fiamm Battery Certificate, original tool kit and jack, a history file documenting its restoration, chassis number 00908 represents an exceptional opportunity to acquire an immaculately restored, historically correct, and low-mileage example of the rarest of all 246 GT L series. This example is surely one of the nicest we have seen.

First in Class
At two (2) of The Quail Motorcar Gatherings
Carmel, California

The “L” model 246 is the most collectible of the 246 GT-246 GTS series having been made in the most limited numbers.

A dazzling Pininfarina-designed coachwork with the body built by Scaglietti, the Dino first debuted in design concept form, known as the 206 S Speciale, at The Geneva Motor Show in March 1965. Several years later, it entered series production with the 206-specification, two-liter engine. After a short run of 150 cars, the 206 GT was updated in 1969 with a larger 2.4-liter motor, which was a displacement that remained unchanged until Dino's discontinuation in 1974. The Dino demonstrated impressive balance during tight handling, thanks to its near-even weight distribution, which was a dividend of the race-proven rear-mid engine placement.

The 246 GT was ultimately built in three separate iterations, respectively known as the L, M, and E-series (corresponding to 1st, 2nd, and 3rd), production totaled 3,761 units over the next five years and included both Coupe and Spyder variants. The L-series served as the direct successor to the 206 GT and was built from March of 1969 until October of 1970. During this time, only 357 total L examples were built, and they are considered by connoisseurs as the “bridge” between the 206 and 246 GTs. The L-Series kept many detailed from the 206 including, the more purposeful 206-style seats and dash, center-lock knock-off wheels, a deeper passenger footwell with a folding footrest, and numerous other small distinctions. More significantly, the L-series cars featured lightweight alloy doors and deck lids whereas the later M- and E-series cars used heavier all-steel bodies.