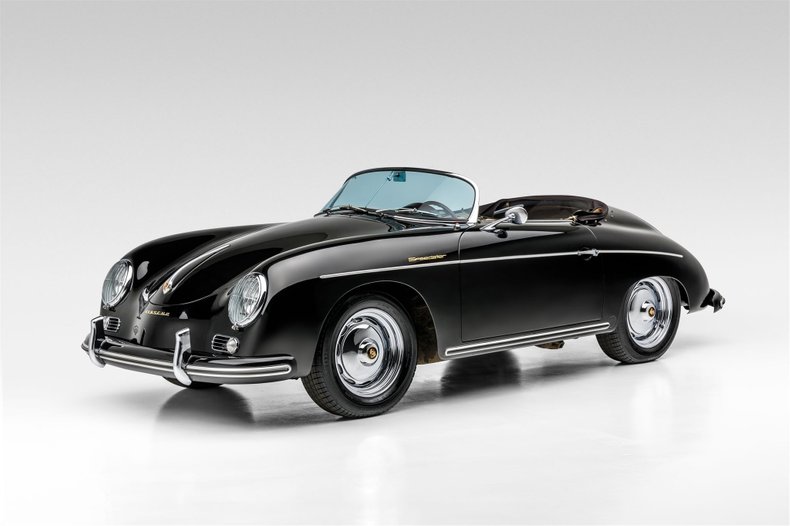 Incredibly dry and straight body with original floor pans finished in a desirable color combination of black with tan upholstery. Paintwork is in very good condition with a great overall fit and finish, along with the interior having correct German square weave carpets, Nardi large diameter 360mm wood steering wheel, and German black canvas top. Mechanically, the 1600cc engine (a replacement unstamped case) runs strong with a 4-speed manual (644) transmission and four-wheel drum brake system. Complete with owner's manual, toolkit, side curtains, tonneau cover, and jack. An exciting opportunity to own and drive an extremely collectible 356A Speedster.

History
It's hard to believe, but Porsche design and the Germans, in general, were able to reboot and go from thinking about Tiger tanks to sports cars in the span of just three years. In 1948, the first Porsche 356 emerged from a converted sawmill in Gmund, Austria (the Allied occupation forces were the new residents of Porsche's Stuttgart, Germany offices).

By 1950, a much-improved version of the Porsche 356 built-in Zuffenhausen, Germany was being sold in America. Early U.S. importer Max Hoffman was responsible for the most-iconic 356 body style, the Speedster, which was a rather stripped down and basic $2,995 version of the car with racing-style bucket seats, removable side curtains instead of roll-up windows and a low windshield that the weekend racers who favored the model could easily remove.

One of the most desirable collector models is the 356 "Speedster", introduced in late 1954 after Max Hoffman advised the company that a lower-cost, somewhat spartan open-top version could sell well in the American market. With its low, raked windscreen (which could be removed for weekend racing), bucket seats, and minimal folding top, the Speedster was an instant hit, especially in Southern California.