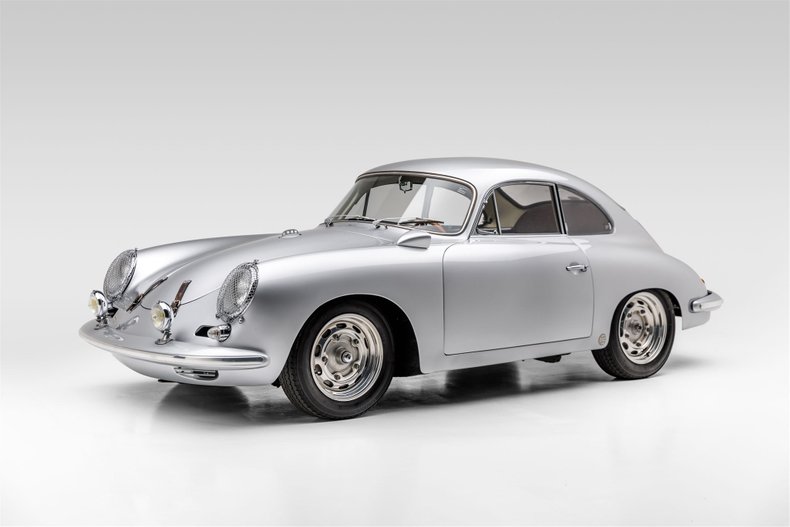 European delivery by Pon Porsche Imports in the Netherlands to Mr. Flemming the first owner from Gardena, California. Ordered in Silver Metallic (color code 6006) with a Red interior. Restored in the late 1990s by a Porsche collector from the central valley of California. During the restoration, this rust free California 356 was converted into a Super-90 GT look by Carrosserie Gretener in Southern California and parts from GT Werks. The interior was done by Carrera Design and $5,179 was spent. Options include Marchal driving lights, leather GT hood straps, GT side mirror, GT stone guards, louvered rear deck lid, Speedster GT seats with corduroy inserts, GT seat rails, GT bumper deco trim with no bumperettes, side deco delete, GT stainless steel stinger exhaust, magnesium offset 5.5” rims, Plexiglass side & rear windows, racing seat belts, roll bar mounts with removable roll bar, wooden Nardi steering wheel, pedal covers, fire extinguisher, CoCo mats, second-hand clock, Sinn clock and stopwatch combo, fire extinguisher and GT gas fill through the hood. Mechanically the 356SC engine was rebuilt by Bob Campbell with the machine work by Competition Engineering. The transmission was reconditioned by John Bunnin in San Diego with high gears in first, second, and third to give fast acceleration. It was shown at several car shows in Northern and Central California but not driven very often. The current owner purchased this 356 in 2011 and has driven it approximately 20,000 miles during his ownership. Never driven in any bad weather and always stored in a climate-controlled garage. Being a California 356 for several decades the floor pans and battery box are solid and well preserved.

This 356 was not a daily driver but was driven fairly frequently from 2011 to 2019. This is a very enjoyable 356 to drive with a very powerful engine that accelerates quickly. The exhaust tone sounds great, the transmission shifts smoothly, and the four-wheel drum brakes stop the car straight. It is very rare to find a 356 T5 Coupe set up as a Super 90 GT look, done to correct specifications and such high standards.