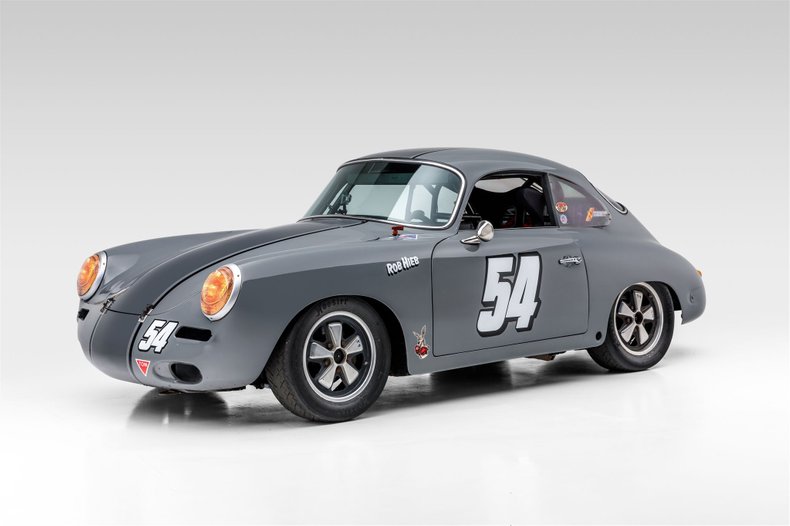 Originally delivered 356SC Coupe finished in slate grey with a red interior, includes all of the paperwork from the original build which was done in the early 1980s by Ecurie Engineering, (owner Mark Eskuche) based in Milwaukee, Wisconsin. The 356 was raced several times during the early 80s and then was stored for a number of years until it was purchased by the current owner.

The current owner purchased this well-sorted 356 race car in May of 2010. At that time, a new roll cage was installed, and some mechanical issues were addressed to get the car updated and race-ready. In 2011, 356 Enterprises (Vic Skirmants) performed the following: complete engine rebuild, SCAT crank, Carillo rods, cam, pistons, head and valve work, transmission rebuild, suspension work and conversion to a 12 volt system. Total cost of rebuild to current 356 race specs was $20,698. It was raced from 2011 until 2017 on average 3 to 5 race weekends per year. In 2015 the car was sent to Ron Goodman's shop in Australia where he did the most recent restoration. The car was finished in light grey with dark grey stripe work. The most recent race prep was completed in 2018 by Ecurie Engineering totaling $14,000 in receipts. As the car was last raced in 2017, the engine rebuild is completely fresh. 356 Enterprises last went through the gearbox in 2016, so the car only has a couple of race weekends on the gearbox freshening/rebuild. Also includes: 8 gallon ATL fuel cell, electric & mechanical fuel pump, auto power roll bar, external battery disconnect switch, tow hooks front & rear, Schroth racing seat, Momo Italy suede steering wheel, Aluminum inner door panels with leather straps for the plexiglass windows, Halon fire extinguisher, stock gauges and Maximum Performance 8,000 RPM tachometer, VDO oil pressure and oil temperature gauges, AIM Racing Software, drilled door handles, and removable deck lid.

The owner raced this car at many historic tracks including: Road America, Road Atlanta, Mid-Ohio, Watkins Glen as well as COTA, scoring numerous podiums. The owners last race weekend in the car was at Mid-Ohio in June 2017. There he took second and third place in the sprint races and won the endurance race. This is a highly competitive and race-winning car.

This desirable vintage 356 race car is SVRA/HSR compliant and is fully race-ready. Complete with documentation and paperwork from 1983-2018. Mechanically in superb condition with a great engine with current dyno documentation.