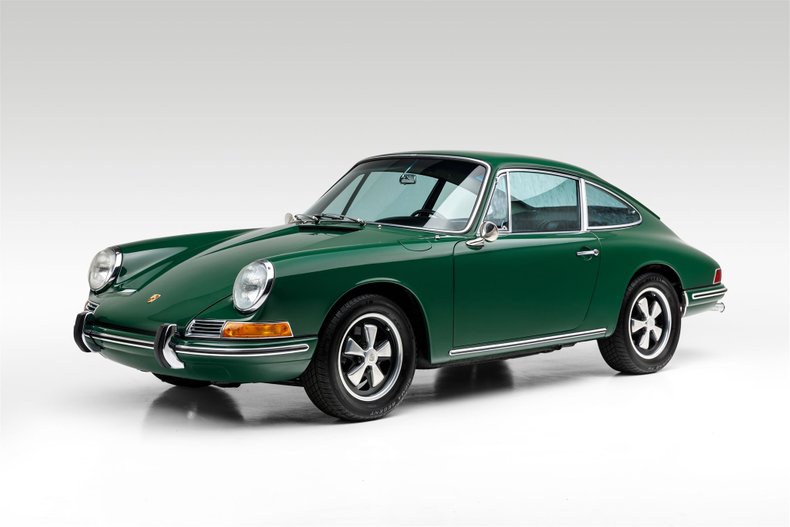 The first owner was Edwin H. Taylor from San Antonio, Texas. According to the Porsche Production Specifications and the Kardex, this 912 was originally finished in Light Ivory (6604) with a Black leatherette interior. Original options include tinted glass all around, antenna, and Semperit Tires. The earliest known documentation begins in 1987 where the 912 was serviced at Dennis Sherman - Foreign Car Service in La Mesa, California. Over the next couple of owners, the 912 stayed in the San Diego region where it was serviced by Dieter's, Dennis Sherman, and Wayne Baker which are well-known Porsche shops. Mechanically, the 1600cc flat-four engine received a top end rebuild by Dieter's in San Diego, California at 41,229 miles and currently runs strong with a smooth-shifting 5-speed (902/1) manual transmission as well as four-wheel disc brakes.

In 2007, the 912 was completely repainted in Irish Green and a restoration was done including all new rubber seals, engine out detail, undercarriage detail, an original set of Solex carburetors were rebuilt and installed with correct air cleaners, a complete new interior was installed and Autos International recovered the front seats in black vinyl with houndstooth inserts. Over the past 13 years of ownership, the previous owner has driven the 912 on a regular basis on the weekend and has always had it garaged. The paint and interior are in excellent condition with great gaps and panel fit. The glass, trim, and exterior lights are in very good condition as well. The undercarriage is rust free with solid floor pans and front suspension. This 912 is equipped with 6” x 15” Fuchs alloy wheels, that have been restored, a radio delete cover, and a leather-wrapped steering wheel with butterfly horn ring. Complete with spare tire, jack, original toolkit, original owner's manual, service history from 1987-2018, Kardex, and Porsche Production Specification sheet.

Ready to go anywhere reliably. These 912's are the value play in the vintage Porsche market. They have the character of a late 356 and far more fun to drive on a curvy road than an early 911. If you have been looking for a really good 912, this is a great one to own!

Today, all but true Porsche enthusiasts may have forgotten that the Butzi Porsche-styled 901 (aka, 911) had a four-cylinder twin for the first five years of production. Introduced in 1965 as a replacement for the venerable old 356, the new four-cylinder Porsche brought the 911's new design across the entire product line. A 912 is essentially a 911 body paired with a pushrod four-cylinder, which was actually a slightly detuned variant of the 356SC motor. While the 912 did weigh 133 pounds more than the old 356C, the new body was more aerodynamic and had an optional five-speed gearbox, a $75 option at the time for the 912, which aided performance. Upon its introduction, the 912 sold for $4,700, outselling the 911 by a margin of two to one.