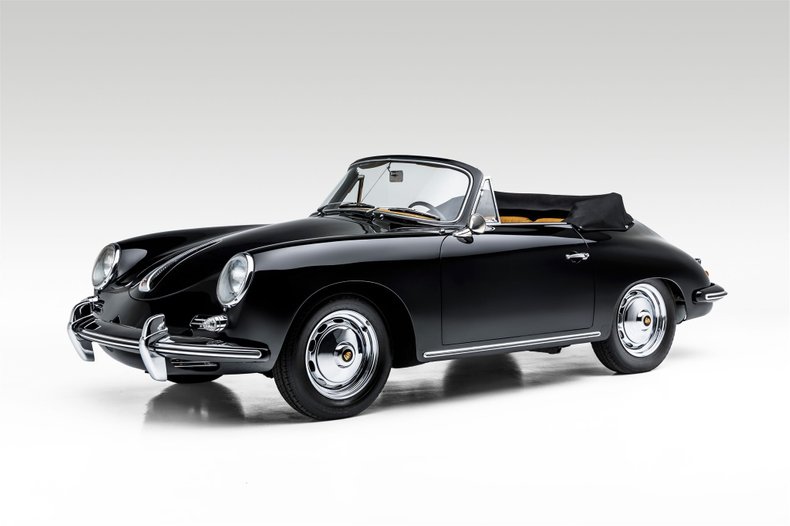 This particular cabriolet is a mid-production T-5 356 and featuring the early type 356B body, which retains the smaller trunk opening, single-engine grille, and fuel filler under the front trunk. Out of 1,616 T5 Cabriolets built this is the 66th from the last off the production line in December of 1960, titled as a 1961. The Super-90 engine no. 801923 is matching per Porsche Kardex; the date of completion was December 22, 1960. The original handler was Porsche Zentrum Fulda Kahrmann in Fulda, Germany, and sold to the first owner, Mr. Edward P. May who was based in Paris, France. A few months later, the car was shipped into the US to Hoffman Motor cars in February of 1961.

European Collectibles sold this 356 July of 2003 to one of its past clients who lives in Central California and has enjoyed the 356 for the past 17 years. The last major service done by the owner was September of 2019 which included an oil change, valve adjustment, brake inspection, the link, the kingpins were rebuilt, and a front disc brake upgrade was installed; $3,092 was spent. European Collectibles has done the most recent service and installed five new tires. This 356 performs flawlessly and has plenty of horsepower (90HP). The 741 manual 4-speed shifts through the gears smoothly and the four-wheel drum braking system has been upgraded with the front disc brake conversion.

The original color combination was Silver Metallic with a blue interior. Currently, the 356 is finished in Black with a tan interior, black soft top, and black boot cover. There were three options of engine types available; Normal, 60HP (standard engine and the most common), Super, with 75HP (an upgrade), and the Super-90, with 90 HP (top of the line).

Looking into the front trunk you will see the original sound deadening (insulation) along with the original fuel tank and sending unit with a chrome spare wheel and leather tire strap. Under the engine deck lid, the original sound deadening is also still intact along with a nicely detailed engine. Options include: Chrome wheels with Super hub caps, new Vredestein 165/15 tires, black soft top, black boot cover, owner's manual, and a spare tire with a leather strap. One of the most desirable 356s with a factory Super 90 engine; they are getting very difficult to find in this condition and even harder to find a SUPER-90 Cabriolet.

For the 1960 model year, the 356A model was out and replaced by the 356B, which was known internally as the T5. It looked similar on the outside, but there were numerous small and important changes to the body. The front bumper had enlarged rim guards that were positioned higher and the headlights were slightly raised as well. The front indicators stuck out further and the front lid handle was new. In the back, the lights for the license plate were integrated into the now raised rear bumper, and the reverse light was lowered.

During its continued evolution, the Porsche 356 had grown in both stature and price, but it still had no direct competition. MGs, ACs and Jags all combined some elements of the 356's appeal but were not as refined and sophisticated in their execution, at least according to Porsche loyalists. The 356B further solidified Porsche's reputation for building high quality, fun and quick little sports cars. Plus, it allowed the company to continue the slow, methodical growth that allowed it to become one of the world's premier specialist car manufacturers.