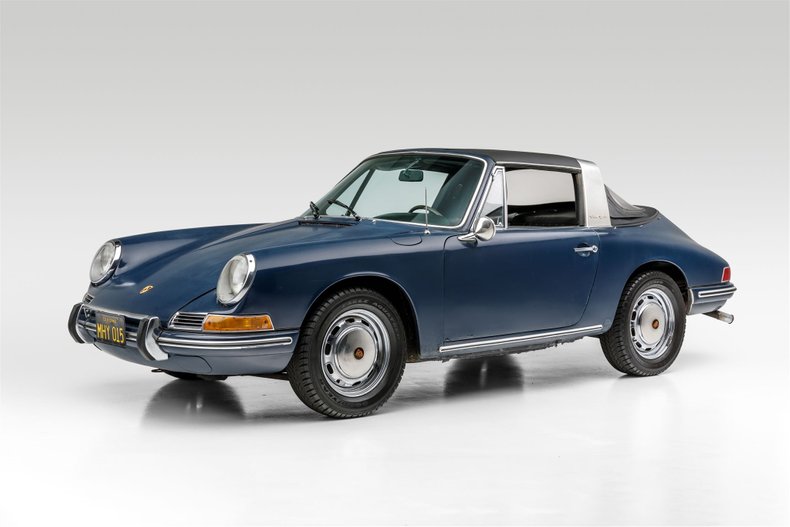 In 1967, Porsche introduced the “Targa” which became first available and sold as a Soft Window Targa. This example was finished from the factory Aga Blue (6608) with a Black leatherette interior. The Aga Blue paintwork has a patina finish and can be kept as is or be fully restored. Mostly original interior with the stock steering wheel and deluxe butterfly horn ring as well as the last year of the VDO green script instrumentation.

The earliest known history begins in 1986, records indicate Mr. Corn owned the vehicle up until 2017 where ownership was transferred to who we believe to be the 4th owner. There is rust on the outer edge of the floor pans on both the driver's and passenger's sides. The front suspension pan and both the driver's and passenger's side floor pans have been replaced.

After enjoying the vehicle for the past two years, the current owner decided to give his 912 the love it deserved. In 2020, Canyon German Auto replaced the following: drive seals, side seals, clutch assembly, clutch disc, release bearing, flywheel rear seal, front pulley seal, lead shim, transmission main shaft seal, front rotors, front brake pads, rear brake pads, rear brake lines, engine sound deadening pad, brake fluid, hood shocks, axle boots, master cylinder, heater hose, and wiper blades. During the same time, the engine was dropped, and a top end of the engine was rebuilt including new pistons and cylinders, engine gasket set, base gaskets, valve job, and the jets on the carburetors were cleaned out. The total amount for the work performed was $8,329.17.

The Porsche “soft-window” Targa configuration was a true example of innovation for the German manufacturer. First revealed on a Porsche 911 in 1966, the Targa was designed to bring the open-air experience to the world-beating sports car without compromising structural rigidity. At the time, it was feared that impending American safety regulations would effectively ban the traditional cabriolet. The solution was the Targa—a compromise that would soon become an enduring addition to the Porsche model range. The first Targas paired their signature removable roof panel with a foldaway plastic rear “soft” window.

The 912, Porsche's entry-level model, would not miss out on this development. Similar in style to the 911 but powered by a flat-four engine and prioritizing handling over outright performance, the 912 eventually received many of the innovations first deployed on the six-cylinder car. And so, in 1967, the 912 Targa was born, featuring the same removable roof and plastic rear windows.

However, considering the relative popularity of the 911, and the fact that Porsche introduced a hard rear window for Targas in 1967 (initially as an option), only roughly 2,500 912 soft-window Targas were ever made. Some were later converted to hard-window cars by their owners, making these already uncommon 912 Targas in their original configuration even rarer and more desirable.