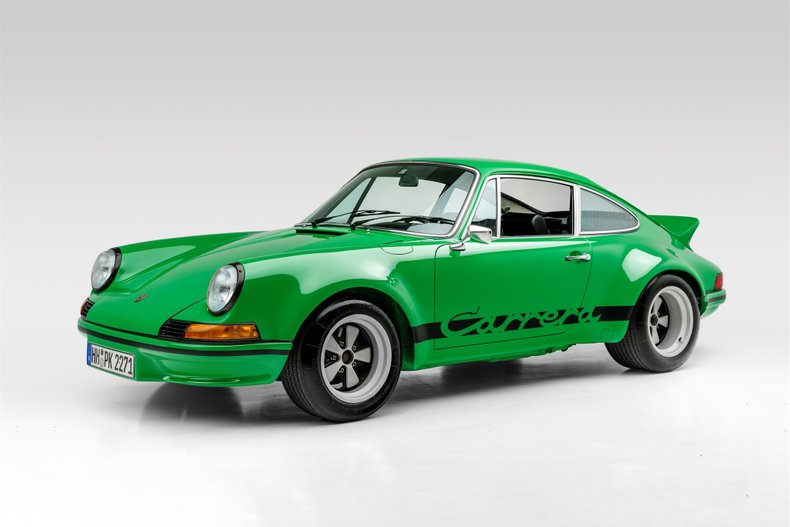 Two owners, a California car that was sold new in Sacramento, California. It was purchased by the second owner in 2009 and was driven back from Sacramento to Los Angeles. The 1973 911T is an MFI long hood which is a factory Viper Green (color code 225). This 911 was the current owner's ultimate RSR, hence there was never any rush to finish the project. Some of the best subcontractors were used over the years and many factory OEM parts were accumulated, which makes this build, unlike any others you will find. The attention to getting all the right details was a painstaking task.

An incredible build of a 911 RSR which was a labor of love, from 2009 to 2019. The 911 was stripped down to the tub, then the body was stripped to steel, and there was absolutely no rust found anywhere. The body did not undergo any rust repair, nor had it ever been in a major accident. The floor pans and front suspension are all original along with the undercoating.

Paint and Bodywork
The front and rear RSR flares were butt-welded by RS Motors, with RSR reinforcements to correct RSR specification and the bodywork was done by Esposito Porsche Restoration in North Hollywood, California, before returning it to Kundensport for a show quality paint in its original Viper Green exterior color.

Mechanics
ANDIAL Racing built a 2.7 RS Spec engine on a 1971 Magnesium 911E case (type 911/01) engine number 6210515. The engine was disassembled, inspected, and detailed by Valley European. The 915 5-speed gearbox is a magnesium case with a limited-slip differential that has been disassembled, checked, cleaned, and is running with stock ratio gears.

The assembly of the suspension and brakes was started by MKS, who installed new front shocks, rear coil-overs, reinforcements to the rear coil-over mounting points, front suspension strut reinforcements, and alloy RS front calipers. After all the suspension was completed, the 911 was sent to California Porsche Restoration (CPR) where it had the engine, gearbox, and final electrical installed. Once completed, the 911 RSR was driven 150 kilometers and finally dialed in by Swiss Motors in Culver City.

This 1973 911 has been fully restored and modified with the best available performance upgrades to an early 911 RSR look. The mechanical restoration, assembly, and sorting were performed by several specialists all in Southern California. The build cost was in excess of $150,000, not including the donor car, and is documented with receipts. It has been driven 323 Kilometers since completion and is truly a BLAST to drive. A stunning example of an early 911 R-Gruppe with approximately 225 horsepower that stands out in any crowd!

When Porsche released the Porsche 911 Carrera RS in 1973, they didn't do so in the hope of creating a road car legend. Instead, it was a means of getting the 911 Carrera RSR homologated for Group 4 racing.

In 1973, the 2.8-liter Porsche 911 Carrera RSR would start the season in victorious fashion, a Brumos-entered car winning the 24 Hours of Daytona in February with Peter Gregg and Hurley Haywood at the wheel.

By the end of May, the factory Martini Racing squad had added a famous triumph at the Targa Florio to the trophy cabinet before the '73 RSR was modified with a 3.0-liter engine for that year's 24 Hours of Le Mans.

This engine would go on to power the 1974 Porsche 911 Carrera RSR, a car that dominated Group 4 racing for the next 24 months in the hands of various independent outfits such as Gelo Racing and Kremer Racing, while a 2.8/3.0 RSR hybrid competed in the US IROC series during 1973/74 winter.

1974 would also bring about the Porsche 911 Carrera Turbo RSR 2.1, a prototype racing machine that managed to finish second overall in the 24 Hours of Le Mans, proving the forced induction concept to the Stuttgart board.