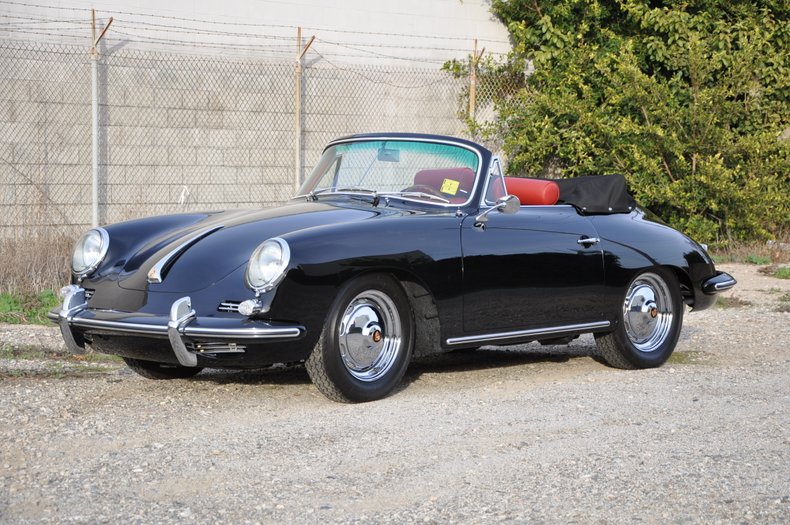 The 38th T6 356B off the line. Engine #804318 is original to car. Per Kardex, the date of birth was 10/31/1961. Sold by Porsche Dealer Rittersbacher in Kaiserslautern, Germany, it was delivered as a “Cabriolet/Hardtop”; meaning it was a Cabriolet body with an included Hardtop. The car was brought to Porsche Cars of Southwest in December of 1965. Hardtop is original to car. Soft-top was sourced and added later. Soft-top was reupholstered and fitted to the car by Liberty Motorsports.

It was sold to the current owner August 2010 by a family in Las Vegas, NV, where it had sat for 15 or so years. Titled from Nevada, dated 1/17/73 shows car to be a “2 Dr Coupe”, which would indicate car was shown with hardtop, as soft top did not exist at this time.

Once the current owner got the car, he undertook a complete and thorough restoration of this 356. The following is a brief list of the work done: Dave DeMaria of Award Winning Vintage Car Works, Englewood, CO handled all body work and preparation to paint. Tom Scott, multiple concours winning painter and 356 expert handled the paint and final assembly. Victor Miles was charged with the restoration of most of the chrome and bits that make a difference. The interior was done by Autos International. Transmission was rebuilt by “Trevor” of Denver, Colorado. Engine guru, Roger Shapiro rebuilt the motor using the original Super-90 case, a 912 Crankshaft, Prauter Connecting Rods, Shasta Pistons and Cylinders, NuTek Cam and Cam Followers. All sheet metal was powder coated and hardware was plated in the zinc finish. The brake drums were trued and resplined. Brake linings were matched to the drums. New brake lines were also installed. A new harness from YnZ was sourced and Joe Leoni provided his starter relay, headlight relay and CuLayer rear lights.

Beyond the highly detailed restoration, this 356 Cabriolet is very interesting. It is a very rare Cabriolet-Hardtop. It left the factory with the hard top in place. It is also a Super 90, which is very rare. Fewer than 700 Super 90 Cabriolet's were built and less than 20 were delivered as this one was spec'd. The Super 90 was restored to show, but was also set up to drive. Both the hard top and soft top come with the car so you can change your motoring experience as the season change. Whether the hard top is in place or the soft top is down, this 356 offers an incredible driving experience.