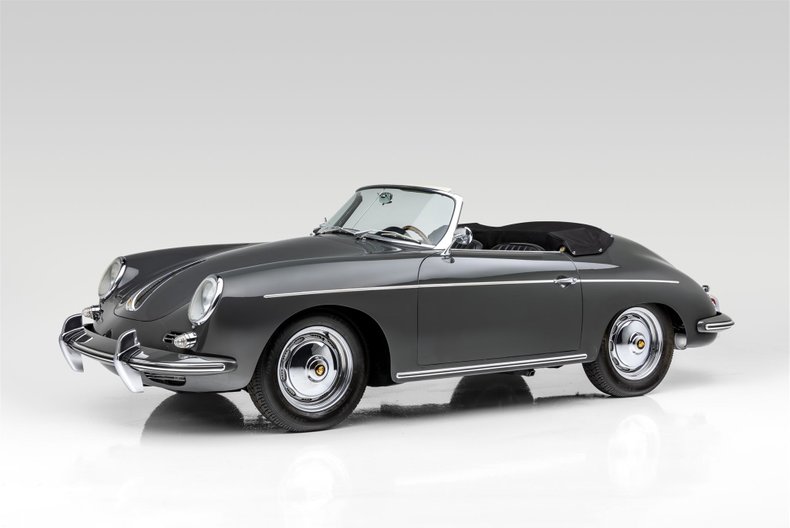 California car with Yellow/Black plates in exceptional condition throughout. Finished in Slate Grey (6201) with Black leather interior. Exterior brightwork, glass, and the 4.5” x 15” chrome steel wheels are all in remarkable shape. The upholstery exhibits just the right amount of wear for its age with VDM Carrera wood steering wheel, deluxe horn ring, day/night rear view mirror, and VDO instrumentation. The undercarriage is in excellent condition having recently benefitted from a full undercarriage detail performed by European Collectibles.

According to the Porsche Kardex, VIN 89624 was delivered by Brumos Porsche in Jacksonville, Florida finished in Slate Gray with Gray interior. Options include reclining seats, outside rear-view Ponto mirrors, rear luggage suitcase, VDM Carrera wood steering wheel, deluxe horn ring, day/night rear view mirror and compensating spring. The earliest record starts on September 13th, 1988, where the previous owner, Mr. Grossman (a San Francisco Attorney), purchased this Roadster from the Auto Boutique in Encinitas, California for $30,962. In 1995, Mr. Grossman commissioned Professionally Engineered Products in Los Osos, California to complete a full restoration and elected to have the interior color changed from gray to black. After the restoration was completed, Mr. Grossman enjoyed the Twin Grill Roadster for the next 26 years and maintained the 356 over two and half decades.

Mechanically powered by its (616/12) 1600cc flat-four “SUPER” engine producing 75 horse power with a matching (741) 4-speed manual transmission and freshly rebuilt four-wheel drum brake system. The factory stamped number on the cover plate of the engine matches the Kardex and is original to the car. The top end of the engine was recently rebuilt including new pistons and cylinders, rebuilt cylinder heads, new valve guides, rebuilt connecting rods and new rod bearings. This is a very fun 356 to drive with no issues. Complete with original Porsche keys, Porsche Kardex, boot cover, tool kit, jack, owners manual and 33 years of extensive service history. Roadsters of all years have become highly collectible, and high-quality, documented, examples such as this come to market infrequently.

History
Porsche's popular 356 Roadster was introduced in September 1959 for the 1960 model year as a replacement of the one-year-only Convertible D, the Speedster's more civilized successor. The new T-5 Roadster was built until September of 1961 and brought several marked changes in appearance: the front fenders and headlamps were raised, as were both the front and rear bumpers, to better deal with urban parking. New vertical bumper guards also helped in that respect. New brake-cooling intakes were added to the nose below the front bumper. There were new cast-aluminum Alfin brake drums with iron liners, and the brakes had improved sealing to repel water.

Porsche's 356 B Roadster was the final evolution of the iconic Speedster, which was replaced by the Drauz-built Convertible D in 1959. Drauz eventually handed over some of its Roadster production to Porsche's Belgian distributor, D'Ieteren Freres, and the cars from D'Ieteren can be immediately identified by their pair of engine cover cooling grilles which is called the Twin Grill Roadster built over a 6-month period before be discontinued in March of 1962 due to the fact that the Cabriolet had become more popular in sales.

The Roadster shares many of the comfort attributes of the Convertible D, including roll-up windows, comfortable Coupe seats, and a well-constructed convertible top frame with a tan-painted frame and wraparound rear window. For those with competition in mind, the windshield could be removed, and roadsters, like the Speedster and Convertible D, soon became popular in amateur sports car racing around the world.