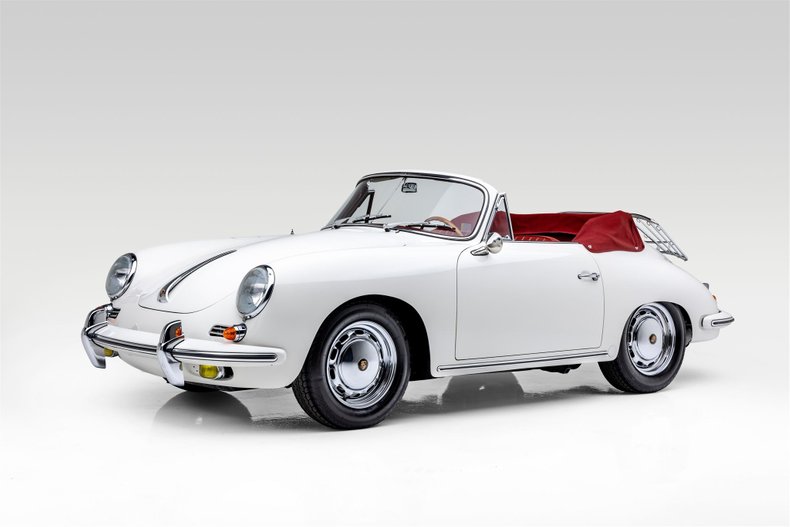 Originally delivered by Competition Motors in Culver City, California finished in Light Ivory (color code 6404) over Red (70) Leatherette upholstery. According to the Kardex, the following options include hubcaps with crest, Talbot mirror, extended steering column, and green-tinted window. The Ivory paintwork is stunning against unblemished brightwork, rubbers, aluminum deco trim, and Sekurit glass. The Red leatherette upholstery is in excellent condition with a red canvas boot cover to match and a black canvas soft top. A 3-spoke period-correct wood Nardi steering wheel is in great condition with VDO instrumentation and an AM/FM Blaupunkt Radio. The 15″ chrome wheels with porcelain Porsche-crests on the hubcaps are mounted with 185 70 HR15 Sprint Classic Vredestein tires. A date-coded (7/64) Lemmerz spare wheel is fitted in the front trunk along with a toolkit, jack, and a fire extinguisher.

According to the current owner (an award-winning architect), this 356C was subjected to a full cosmetic and mechanical restoration in the early 2000s. Following the restoration, the 356C went into storage in an estate in the San Fernando Valley. Nearly 18 years later, it eventually made its way over to Bob Campbell, who owned a well-known 356 dealership/workshop in Santa Clarita, California. Bob sold this 356C to the current owner and was commissioned to rebuild the engine with a big bore piston and cylinders kit at that time.

Mechanically powered by a 1600cc flat-four period-correct engine paired to a 4-speed manual 741 transmission and four-wheel disc brakes. This 356 Cabriolet runs phenomenally with plenty of power, a smooth-shifting transmission, and brakes that stop the 356 perfectly. A fine example of the end-of-the-run Porsche 356. This Cabriolet would make an excellent addition to any collection.

History
The Porsche 356C was the final Porsche model to debut before the completely new 911. It therefore mainly featured mechanical rather than aesthetic improvements. The 1964 and 1965 cars culminated with the pushrod-operated SC engine and the complex quad-cam Carrera 2 unit. This model also served as development for Porsche into the widespread use of all-around disc brakes and much work was undertaken to improve the tail-heavy bias of earlier cars with the addition of larger anti-roll bars and a steering damper.

The 356C represents the final and most developed version of the model that made Porsche's reputation on roads and racetracks throughout the 1950s. It was a far cry from the handful of basic sports cars made in a small village in postwar Austria. Porsche had grown exponentially and gained an enviable reputation all over the world for building high-quality, fun, and quick sports cars. It was almost all thanks to the 356, and the 356C was a worthy send-off.